If you are responsible for a Flare project, then you probably create and edit CSS code. Whether you are using Flare's own Stylesheet Editor or a text editor such as NotePad++, you might have been frustrated by having to re-select or re-type the same colour values within multiple styles. This seems counter to Flare's philosophy of single-sourcing, and increases the risk of errors, particularly if you are working with hexadecimal colours. Lack of support for variables has, until a couple of years or so ago, been a weakness of CSS, and some developers have turned to CSS preprocessors such as Sass or Less to provide this functionality.

However, in December 2015 the W3C's candidate recommendation for a new CSS module called CSS Custom Properties for Cascading Variables formally laid out how variables should work in CSS. This recommendation has now been implemented by the current versions of all the major browsers (with the exception of Internet Explorer), and earlier this year MadCap added support for CSS variables within its 2019 release of Flare. This article explains how they might help you, and how to go about using them.

How CSS variables can help

I'm sure you're familiar with the situation of being given a standard colour value by your marketing department to use for a range of elements (such as headings and borders) within your pages. You've probably needed to repeat this colour value in multiple declarations throughout your stylesheet, with the consequent risks of introducing typos or of missing one of the occurrences in the case of the colour needing to be updated.

This is where CSS variables come in: the idea is that you store the colour value as a variable, and then use the variable name in declarations where you would previously have included the value. As a result, if the value needs to be changed, you only have to update it in one place. Although CSS variables are probably most useful for colours, you can in fact use them to store any values including size (in units such as px, pt, or em), font-family, or image URL (for example: url('../images/Alert.png')).

As well as being able to define a value once and re-use it repeatedly, CSS variables have other benefits:

The syntax of CSS variables

Variable names must always start with a double-dash --. You define a CSS variable in your stylesheet using a declaration of the form shown by this example:

The :root pseudo class refers to the highest-level 'parent' element (the html element in your Flare topics), which means that the variable can be used by any element within the topic (h1, h2, p, li, etc.). If, for any reason, you want to define a variable for a specific element or selector, then you can do so using a declaration of the following form:

In this case, the --heading-colour variable can be used only by the h1 element, or classes of the h1 element. Given that the main benefit of CSS variables is that they can be defined once and then used in multiple styles, I don't believe you would normally want to restrict the scope of a CSS variable in this way.

Having defined a variable, you can then use it as a value within a style declaration by inserting var(--variablename).

CSS variables have been supported in most of the major browsers for two or more years, and you could actually have used them with Flare 2018 or earlier by using a text editor to write the required code into your stylesheet. However, there would have been a couple of problems:

If you had ignored these errors, then the final HTML5 output from Flare would have included the CSS variable correctly and been fine. But the authoring experience within Flare would have been compromised.

Flare now understands CSS variables and the code is no longer treated as invalid. In addition, Flare's current Stylesheet Editor has additional controls for adding new CSS variables and for inserting a CSS variable in any location where a value is required.

Then you enter the required details for the variable using the dialog shown below. Note that you don't need to type the two dashes at the beginning of the variable name — Flare will include them for you automatically. 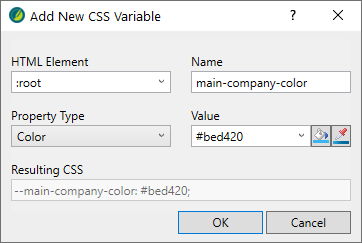 Using variables as values in styles

Using Flare's Stylesheet Editor, you can insert a CSS variable in any field that requires a value. With your cursor in the field, select Insert CSS Variable from the CSS Variable control (see screenshot below). Then you can select the required variable from a drop-down list.

There is one potential pitfall to watch out for: if you insert a CSS variable within a field that contains multiple values, then any values that were already in the field are removed. For example, if border-bottom was already set to dashed 3px #000000 (as shown in the first screenshot below) then inserting a new colour as a variable would result in the other two properties being lost (as shown in the second screenshot below). The workaround is to type the required code for the variable, in this example: var(--StdGreen), directly into the field.

CSS Variables are supported by the current versions of all the major browsers, both desktop and mobile. However, they are not supported by any version of Internet Explorer. If you have users that access your content using Internet Explorer, then you can still use CSS Variables in your Flare projects. However, you will need to select an Advanced option in your HTML5 Target that replaces CSS variables with standard values in the stylesheets that are generated in the output. 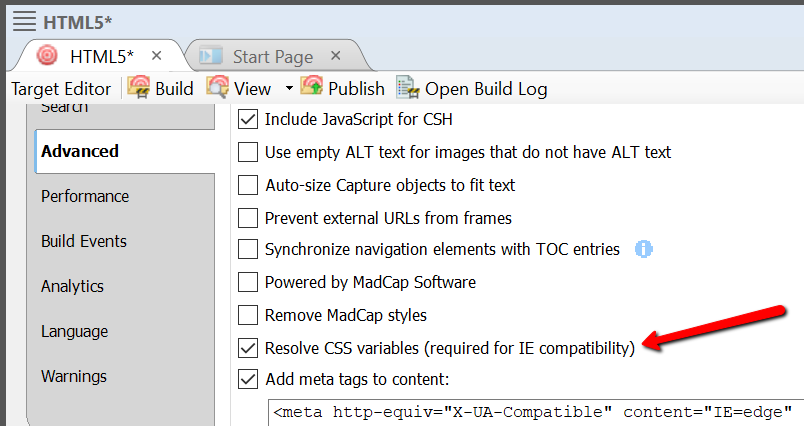 CSS variables add functionality which you can use to ensure consistency in your Flare projects.

CSS Variables: Why Should You Care? (Rob Dodson):
https://developers.google.com/web/updates/2016/02/css-variables-why-should-you-care

Demo of how custom properties can be changed dynamically using JavaScript:
https://googlechrome.github.io/samples/css-custom-properties