My overall view is that the recent release of MadCap Flare 2021 consolidates and builds on a product that, in partnership with MadCap Central, provides a powerful single-sourced authoring and publishing workflow. The new release includes some important enhancements to existing functionality (in particular PDF output) as well as adding a small number of useful new features.

For me, one of most welcome changes in the new version is the increase in quality of typography in its PDF output (especially noticeable for small fonts), which puts Flare on a par with rival products such as Adobe InDesign that have previously outshone Flare in this respect. Before I get on to the new features, I'd like to mention a couple of small but pleasing UI (User Interface) changes:

Now for the more exciting part of this review: the new and significantly changed features, which include:

I'll take a look at each of these new features in the following sections.

Markdown is a lightweight mark-up language for specifying the format of text in a plain-text editor so that it can be published to a presentational language such as HTML. Importing Markdown into Flare has only been possible previously using a third-party plugin from Improvementsoft. The advantage of the out-of-the box support that Flare 2021 provides is that importing Markdown is now similar to the process for importing Word documents, Confluence pages, and the other document formats that can be imported into Flare.

There are a few different variants of Markdown, and Flare supports the standardised form of Markdown called CommonMark. For example, it recognises both ways of marking up a main heading, which are: to precede it with a hash # sign, or to follow it with a row of equal signs (looking like a double underline). One small limitation I have noticed is that forced line breaks (indicated within Markdown by either a backslash or a double-space) are not preserved after import into Flare.

What I like about Flare's Markdown import is that, in common with its support for importing Word and other document types, it enables you to save all your import settings within an Import file. This means that you can potentially link to the source Markdown document and re-import it using the same import settings whenever the document is updated. As a result, you can use Flare as a publishing engine for generating fully formatted HTML5 or PDF output from a Markdown source. Of course, you are also able to do a ‘oneoff’ import of Markdown content, and then edit the resulting topics using Flare's XML Editor.

I mentioned above that it has been possible to import Markdown in earlier versions of Flare by using a plugin from a Swedish company called Improvementsoft, and this continues to work with Flare 2021. The plugin is called Markdown Plugin II, and it offers certain advantages such as the ability to create Flare snippets from Markdown files, an option to convert links between Markdown files into Flare cross-references, and correct conversion of line breaks. However, it does not enable you to map styles or to split a single Markdown document into separate topics at headings, which is possible with Flare 2021’s own Markdown Import feature. In my view, it may still be worth having the best of both worlds by continuing to invest in a subscription to the plugin and using it to complement the in-built Markdown Import within Flare 2021.

For further details on Markdown import, see my article on importing from Markdown.

One of Flare’s key strengths has always been its support for both HTML- and PDF-based output from a single source. However, users seeking very tight control of the presentation of its PDF output may have been disappointed by some inconsistent kerning (space between characters), which is particularly evident when the font size is very small. This has been addressed in Flare 2021, and the kerning now appears to be optimised for even the smallest font sizes. The images below show the difference in PDF output for a small sample of text, generated from Flare 2020 r3 and from Flare 2021. I have zoomed in by 300% to make the differences more apparent. 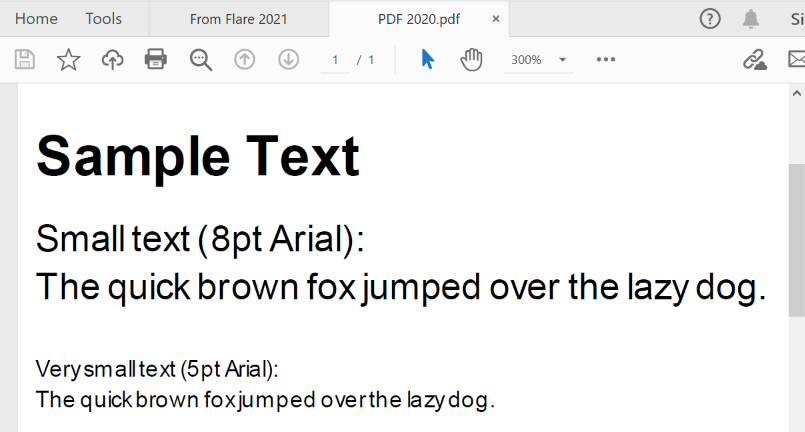 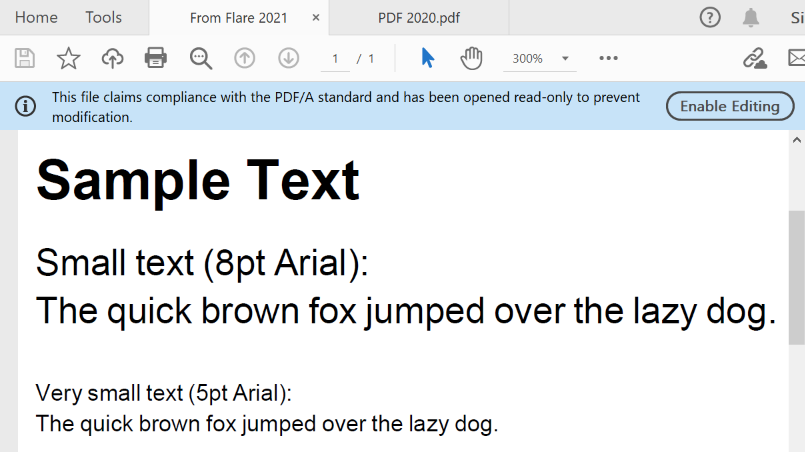 In addition, there are enhancements to the PDF tagging that now make the output compliant with the PDF/UA standard (also known as ISO-14289). UA stands for Universal Accessibility, and it means that documents are easier to read by people, such as the visually impaired, using assistive technology. The PDF documents generated by Flare are also compliant with the PDF/A specification, which means that they are able to be opened and read by a wide range of different tools both now and into the future.

There is a checkbox in the PDF Target Editor (PDF Options tab) for selecting the option to Generate tagged document for PDF/UA. This is selected by default in the target templates provided by MadCap Software. I see no reason to deselect this option, unless you have a compelling reason to minimize the file size of your PDFs and are not concerned about accessibility.

There is a new optional Layout Resizer, represented as a grey bar just above the Ruler at the top of the XML Editor, as shown in the screenshot below. The markers on the bar represent the Tablet and Mobile breakpoints, as well as other custom media queries used for responsive design (as shown in the screenshot below). The Layout Resizer provides a quick and easy way of previewing the layout of a topic for a specific viewport width within the XML Editor. It enables you to see, for example, where text will wrap, and how different elements of the topic will be positioned in relation to each other. This could be useful if you are designing content that will be displayed within an embedded Help pane (such as Flare’s own Dynamic Help Window), or in the display panel on an instrument.

You can also use the Layout Resizer to define new media queries for your style sheet. However, I suspect that anyone technically competent enough to want to create a custom Media Query would probably do so by typing the required code directly into the style sheet using a text editor.

If you send Flare topics for review by subject matter experts (SMEs) in MadCap Central, then you may notice a new option to accept or reject new images within the content that is sent back to you from reviewers. This is because reviewers are now able to add images using the lightweight editor within MadCap Central. If a new image has the same name as an existing image in the Resources/Images sub-folder, Flare avoids your existing image being over-written by automatically opening a wizard that enables you to choose a different name or location for the incoming image.

The 2021 release of MadCap Flare reinforces its single-sourcing credentials by improving the quality of its PDF output, and offering some welcome new features. I suspect that the new Markdown Import feature will be popular with writers working on developer documentation.

To anyone who is hesitating about upgrading to the new version in case it breaks any of the customisations they may have made to their HTML5 output, let me end this review by reassuring you that there are no structural or JavaScript changes for HTML5 output in this release. As a result, any custom CSS or scripts that you may have written to modify the skin will continue to function exactly as before.

Drümmer O and Chang B (2013): 'PDF/UA in a Nutshell' Association for Digital Document Standards e.V., Berlin